This Ph.D. thesis shed early light on an almost unnoticed field. It deals with the Nordic Customs Union negotiations (1947-59) in the shadow of the concurrent European Free Trade negotiations. The approach is comparative. The Swedish, Norwegian, Danish and Finn federations of industry are compared systematically in an attempt to discern what economic interests business had in a Nordic Customs Union. The main conclusion is that the Nordic negotiations were primarily politically determined in a effort to obtain a better bargaining position for the Scandinavians in the European Free Trade Talks. More than being a Scandinavian or Nordic issue, it is an issue that must be seen in a greater European context. The focus of the thesis is on the intersection of economic and political/cultural factors in the organisation of society.

The Nordic economic cooperation project ot form a customs union during the 1950s was Nordic only inasmuch as the actors were Nordic. Far more it was part of a European cooperation not economic but rather politically concieved as an instrument to facilitate Nordic participation in the European project. An independent Nordic option to the European plan never existed. From its very start the cooperation project was devised by the Marshall Plan.

In this comparative study, Nordic industrial federations are used as tools to ditermine if there was an economic interest in a Nordic customs Union. If there had been, this ought to have been mirrored in the attitudes of the federations, justifying their very existence as advocates of industry's economic interests.

It had been earlier a common and established opinion that Norwegian industry overturned the customs union plan. In this study it is demonstrated that there was considerable opposition to the project also inside Danish and Swedish industry. 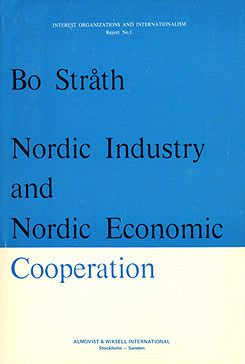