There have been dramatic shifts in the behaviour of labour markets and the conduct of industrial relations in the last century. This volume explores these changes in the context of four societies: Germany, Sweden, The UK and Japan. The Author demonstrates that, despite their manifest differences, for long periods these countries' labour markets were similar in many important respects, at crucial moments however, they were shunted on to divergent tracks.

The emphasis is thus on complexity, contextuality and contradiction in the interaction of economic and political processes, rather than on success stories and failures. The organisation of labour markets and the emergence of nationally specific patterns of industrial relations are shown to be the result of ongoing processes of problem-solving. Power relationships between employers, trade unions and governments are mapped out in detail, and the experiences of the individual countries are contrasted. Crucial to the outcome is the role of tradition within individual countries, which is paradoxically, an agent of modernisation.

Among other things the book discusses:

This book rejects a view on modernisation as a converging process towards an identical organisation of society and demonstrates the diversity of socital organisation. In this cultural perspective the question of who has the power to formulate problems in the social discourse is crucial. A key question is how community was established, either in a liberal Tayloristic/Keynesian form or as fascism, and how institutions for compromises emerged. Both the liberal and the fascist case promised a world without conflicts. The invocation of traditional values is demonstrated to be crucial in the processes of meaning building. 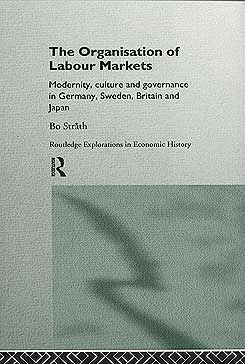