The Politics of De-Industrialisation: The Contraction of the West European Shipbuilding Industry Bo Stråth

Surprisingly, as industries in Western Europe have contracted and unemployment has risen, there has been relatively little social unrest. How is it that so many large industries have been run down so peacefully? This book discusses this important question.

Taking the example of the shipbuilding industry where contradiction has been particularly pronounced and where the workforce has, in some countries, a strong tradition of militancy, the book shows how employers, trade unions and governments came together to bargain over reduction and to manage reduction in a planned way. Based on extensive original research including interviews with participants, the book examines the different background and different approaches adopted in different countries, covering the period from the 1960s to the present. Drawing on the research findings, the author goes on the draw general conclusions about the nature of conflict in industrial society and about the place of trade unions and the role of the state in the political process.

The tripartite negotiations in the FRG, France, the UK, Sweden, the Netherlands, and Denmark were investigated and different patterns of power relationships were discerned. The main question was what factors contributed to a relatively peaceful and smooth contraction process without great political and social upheavals despite unemployment figures far above 10 per cent in many West European shipbuilding regions. The focus of this book Politics of Deindustrialisation is on the interaction between different actors in the political domain and socioeconomic processes. The complex interactions between the political processes, with their own dynamics and their own laws of motion, and the economic logic of industrial and technical progress is the main theme of the book. Similarities and differences form a main theme, with an attempt to integrate the experience into a theory of the state and of pressure groups in democratic societies. The work on this project entalied extensive research journeys over more than 7 months (in addition to invitations as visiting research fellow) to some 10 West European and 4 Asian countries. Over 150 decisionmakers in government administrations, cabinets, industry, and trade unions at local, national, and international levels were interviewed. Scholarly contacts were developed at the universities in Berlin (FU and TU), Bielefeld, Bremen, Cambridge, Hamburg, Glasgow, Kiel, Liverpool, Nantes, Paris, and Tokyo. 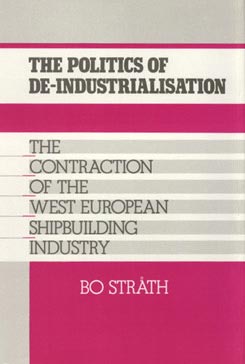