Mellan två fonder deals with the emergence of the idea of a Swedish model and the role of the Swedish Trade Union Confederation (LO) in the Swedish experience of constituting a model society. The Swedish model of social organisation was nothing which suddenly emerged out of the Great Depression in the 1930s. It was much more the matter of an organisation of society which gradually emerged under political conflict since the 1890s and earlier and which constantly was challenged from the left as well as from the right. How it was formed and transformed was very much a matter of power over language and symbols.

The struggle about supplementary pensions at the end of the 1950s was an important phase. This struggle was nothing the labour movement wanted but something it was pushed into by a conservative and liberal offensive in the 1950s. The victor of the labour movement brought expectations and new claims for social change ("increased eqyuality", "more social justice") among trade union members and Social Democratic party members and was therefore an important contribution to the political radicalisation in the 1960s.

The radicalisation of the political language provoked the trade union proposal about employee funds around 1970. The fund proposal can be seen both as an expression of the radicalisation of the social debate and as an attempt to respond to this radicalisation by the trade union movement by canalising the criticism. The long-term impact was that LO lost the political initiative and that the model began to erode. The fund proposal was at the end of the 1970s described as a gigantic attempt by the labour movement to confiscate private property and nationalise the Swedish industry. The fund debate was the symbolic issue where the neoliberal language at this time gradually took over the Social Democratic position of priority of problem formulation established around 1960 after the victory in the supplementary pension struggle. The Social Democrats and the LO lost their established power over language and symbols and concepts like justice and freedom was recharged with new content when the employers rallied in the 4 October movement under blue and yellow flags to protest against the employees' fund proposal. 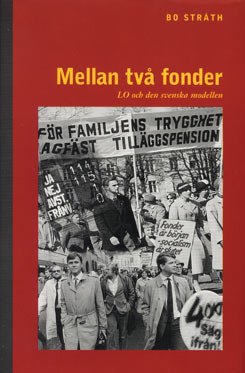