The focus of this book is on the various patterns of interrelationships between employers and workers at shipyards of Gothenburg and Malmö from the 1880s to the 1960s. The employers in Gothenburg were historically liberally oriented with a pronounced patriarchical approach. This resulted in an inclination to crush every workers' attempt to unionise. The workers responded with resistance and a more radical political language than in Malmö, where employers were from the outset open to concessions and recognition of the trade unions. This, in turn, was the case because the workers' collective performance was stronger in Malmö than in Gothenburg.

This micro study deals with the prerequisites for the rise of two different political cultures among shipyard workers and in the labour movement at large in the shipbuilding cities of Gothenburg and Malmö. (Communist in Gothenburg and Social Democratic in Malmö.) As in Nordic Industry and Nordic Economic Cooperation the approach is comparative. Stråth tested this theory later in a corresponding analysis of the German shipbuilding cities Kiel and Bremen, where similarly two divergent political cultures developed. 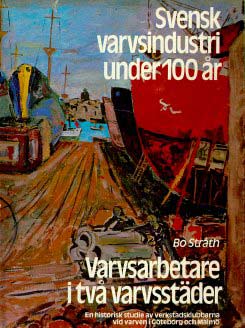